We finally started our great Iceland road trip!  5 people, 10 days, one (smallish) hatchback, about 1,000 miles of Icelandic roads. . . and unlimited adventures.  This was the trip I wanted to have in Iceland.  An epic road trip to see as much as the country as I could.

The Plan:  Our itinerary was to follow Route 1, also known as the Ring Road. The only exception was a two day detour to the Westfjords.  The Ring Road is the national road of Iceland, connecting almost all the inhabited places in the country.  We found driving in Iceland to be very easy.  The roads were in good shape and the signs were easy to understand.  We had heard that Iceland in the summer was very busy so we took no chances with accommodations and had a place booked every night to stay in.

Our first stop was this wonderful bakery and coffee shop.  We were all ready to get out of the car at this point so it couldn’t of come sooner.  The real reason we wanted to stop here though had to do with a recent Hollywood movie.  This was one of the filming locations of the Ben Stiller movie, the Secret Life of Walter Mitty. Only it wasn’t a coffee shop in the movie, it was a Papa Johns.  We had some fun trying to recreate some of the shots from the film.  How’d we do?

The beautiful cinematography from the Secret Life of Walter Mitty was a big part of why I wanted to go to Iceland, so it was exciting to find one of the shooting locations on our trip. Oh and the bakery was pretty amazing too.

There was a lot to see on this peninsula.  A lot more than the half of day we had allotted to it.  But we managed to squeeze in a few sites.  The peninsula is home to a number of cliffs, lighthouses, beaches, a volcano, and even some caves.

Snæfellsnes is also famous for being the inspiration to a well known novel.  The author Jules Verne wrote the book Journey to the Center of the Earth after visiting the Snæfellsjökull volcano.  In Verne’s book, the protagonist finds a passage way in the volcano leading to the center of the earth. 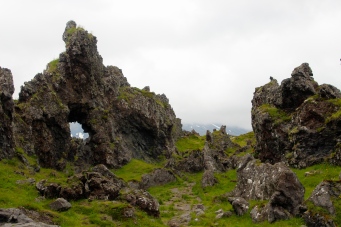 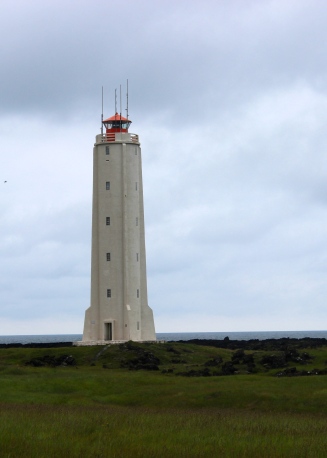 Vatnshellir cave is a unique chance to go into an 8000 year old lava tube.  You descend over 100 feet into the earth and into complete darkness.  The only light comes from the torches (flashlights) the tour provides you.  Our guide gave both a mix of folklore and science.  We learned everything about the cave from its unique bacteria that shimmers like stars when light hits it, to the trolls (really just rock formations) that live down below the earth’s surface. Tours are offered daily but make sure to get there early because they can fill up.

Why don’t they have these in the states?

I have never seen a zip line on a playground in the states.  They are probably deemed dangerous because apparently kids in America are more fragile. . .but they are so much fun!  This was the first one we found and after that, we made sure to stop at ALL of them.  Yes, we are in our thirties, but its always fun to act like a kid once in a while too.

After a long day we finally checked into our accommodation for the night just as it started to rain.  The checkin was at a cute little red wooden restaurant with a grass roof.  Everyone was very friendly and welcoming. We stayed in a building with several rooms and shared bathrooms.

The two sites I used the most for booking my accommodations in Iceland are below:

Hosteling International: Hostels are an easy way to stay cheap(er) in Iceland. There were quite a few of them around the country, even in places where hotels were lacking.

Booking.com:  It seemed most of the hotels used this website for booking their rooms.  I was a bit weary at first, but we were able to check into every hotel on our trip without a hitch.